Item merging allows you to combine multiple items into one 'group' for easier management and more accurate metrics. All past and future occurrences of any merged items will automatically be combined.

Merge into a new item

The first time you encounter a duplicated error, you'll want to create a new group:

Select the 'Merge {n} items' option, and you'll have the choice of creating a new 'Group item' or merging the selected items into an existing group item. 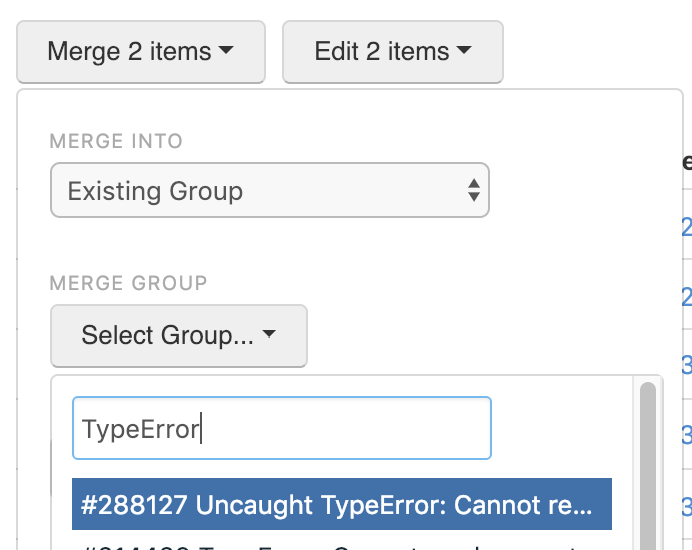 If you want to remove items from a group (e.g. because you mistakenly merged the wrong items):

By default, items which have been merged into a group will no longer appear in the project item feed. To view these items, you can search for is:member.

To filter the item feed to only show group items, you can search for is:group.

After you've merged to create a group item, all future occurrences with the same fingerprint as one of the member items will be included into the group. You may also want to merge similar items that will have different fingerprints into the same group (e.g. all TimeoutError exceptions regardless of where they occur).

If you merge items with a detectable pattern in common (e.g. same exception class and similar exception messages), Rollbar will suggest a new custom fingerprinting rule to automatically combine future occurrences into the group item that was just created.

Did this page help you?